According to leading Vedic astrologers, if the planet Mars is situated in the 1st, 2nd, 4th, 7th, 8th or 12th house in a horoscope and the Ascendant is in the first house, it believed that that the Manglik Dosha is formed in your horoscope. 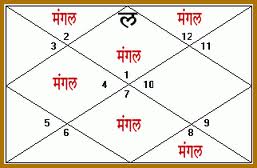 Why is this Condition Feared?
This condition is believed to cause a hold-up in the marriage of a young bride or groom and is also feared to be the cause of marital problems and sometimes the premature death of a spouse.

Exception to the Rule:

One of the most guaranteed ways to avoid any marital catastrophe is by an affected person marrying someone who has the same condition in their horoscope. Most expert astrologers believe that the effects of this dosha is minimized or even eliminated if both the bride and the groom in question have a Manglik Dosha in their horoscope readings.

Should I be Worried

If your son or daughter is believed to be under this effect, and you are a strong believer of Vedic astrology, one can empathize on why this may be a concern to you as a parent. But given the conditions which determine a Manglik, over 50% of the Indian population is under its effect. This means that there still remains to be a lot of choice for your child if you are considering an arranged marriage. The affects of this dosha automatically reduce after the age of 28. This is especially not a very late age for men to get married.

Additionally, there are a number of chants, prayers and rituals that can be recommended by an expert priest that are believed to reduce the affects of this condition.

How do I find out if my Son or Daughter is Affected?

It isn’t too difficult to find out if your child is under the effect of this condition. Approach a family priest, astrologer or ask relatives for recommendations to one. All your need to do is simply provide them with the details of your child’s birth, and they would be able to create a detailed horoscope.

There are also a number of online astrological tools which will help you determine the same.