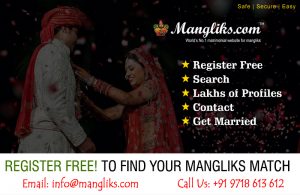 It has been a fairy tale in today’s scenario for the image of love and wedding within us being for non manglik or manglik matrimony. They teach us that marriage are made in heaven. Two persons that in love madely may face obstacles and are finally together at the end. Marriage is also between two families, together with between two individuals that would be passing through societal norms or the checklist. Bride and groom being manglik or non manglik should not be belonging to the same Gotras.

Gotra refers to the root person in an individual’s male lineage. The list of Brahmin Gotras is:

Mangliks.com, one of the leading manglik matrimonial sites in India since 2006 and being Nasscom listed is having 1, 00,000+ pure manglik soulmate being manglik girl and boy. Visit Our website.

Moreover the females consist of XX chromosomes and the males of XY chromosomes. So the Y chromosome is passed on from the father to the son and has no role in female anatomy. Hence Y chromosome plays a vital role in identifying the Genealogy in modern genetics i.e. male ancestry of a person. And the Gotra system was designed to detect the root Y chromosome of a person being non manglik or manglik person easily.

This Y chromosome has no matching pair in the body of the human and doesn’t take part in the normal processes. Thus this rule depicts the patriarchal society approach which wanted to maintain healthy Y chromosome i.e. fair chance of males to exist.

The Gotra system arrived during Vedic period and various counter arguments are also available with the scientific development. It may hold reasonable relevance in the past but today it also acts as a hurdle between two loved ones being non manglik or manglik. Hence we need to decide our own take.