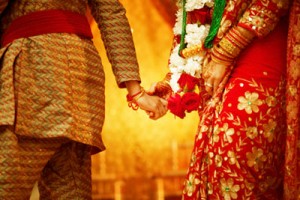 Indian Manglik Matrimonials are known for the traditional values that it instils on the couple in addition to pomp that goes into the celebration. Among the rituals that are conducted over several days, the most crucial is that of the wedding ceremonies itself; i.e., the Pheras. Each phera represents a unique aspect in the life of the couple –

With these simple yet deep promises, a young Indian bride and groom venture into a new life of happiness and bliss.