In spite of all the progress that the Indian society is making at large, it is highly saddening to realize that this birth place of Vedic astrology has reached a point of ignorance and blind faith which results in the generation of a large number of myths and misconceptions about the Manglik dosha. 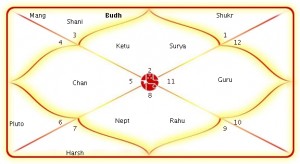 One of the biggest misconceptions about this condition are that marrying someone with this astrological condition leads to the death of either one of the spouses. It is about time that the Indian society chooses to educate itself and break all barriers of superstition and understand what the real implications of planetary movements and positions are with respect to matters of marriage.

The fear of the death of a spouse is largely redundant especially because people tend to generalize the consequence with the presence of the mangal dosh in a horoscope. It is important to understand that the severity of the dosh is highly dependent on the presence of the planet Mars in different houses.

Another common misconception of a ‘double manglik’ is evidently non-existent since there is no such thing. As a matter of fact, if a person with the manglik dosha marries someone with the same condition then it is believed that the ill effects of this astrological condition nullifies itself.

This particular dosha is among the most talked about and feared astrological situations in the Hindu society. And its gravity is multiplied ten-fold because it is believed to have a direct impact on the marriage of a native. There are innumerable numbers of great wedding matches that tend to get rejected everyday because of the presence of this condition in the astrological chart.

There is a lot of confusion and difference in opinion when it comes to the definition of this condition. Different ancient texts, also known as Shastras, will differ in opining over which houses it must be present in to be called a mangal dosh. Additionally, different priests and astrologers will recommend different remedies for the same condition. While some priests suggest that when Mars is placed in the 1st 2nd, 4th, 7th, 8th and 12th house other believe that it’s existing in the 1st or 2nd house does not define the existence of this dosh.

There have been tremendous arguments over this, since there are different schools of thought that belong to ancient priests and Vedic astrologers such as Parashara and Varahamihira. One cannot ignore the likelihood of these texts and ideologies evolving and being exploited over a period of thousand years where beliefs and definition may have easily been modified to suit the prevailing society. Yet, by large most astrologers universally believe that the 2nd house also defines the dosha and accept all 6 houses.

On the other hand, there are 12 houses in a horoscope and if Mars is present in 6 of them, statistically it means that half the population of the world is born under this condition. This means that there is nothing to fear of this manglik condition and you are bound to find for yourself a suitable life partner with whom you will spend the rest of your life with happily.