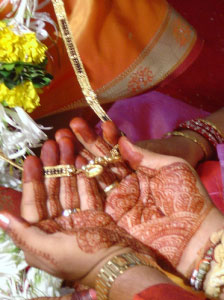 The Hindu scriptures lay a lot of importance to the Mangalsutra in the life of a married Indian woman. All regular as well as Manglik Marriage ceremonies involve a ritual in the wedding ceremony which signifies the religious and psychological importance of the Mangalsutra in an Indian wedding. This thread is considered to be a sacred thread of love and faith and is often worn by the woman as one of the 16 symbols of their marriage, which is commonly known as the 16 Sringaars.

In the traditional sense, this thread is considered to be the most honorable token of respect and love that is offered to the bride by her husband during the ceremony. The scriptures state that wearing a Mangalsutra is a way to ensure a healthy and long life for husband. It has thus found utmost significance in Manglik Marriages where one always fears the occurrence of negative events in the due course of one’s marital life.

Many cultures within Hinduism believe that breaking the string or losing mangalsutra is a sign of a bad omen. The necklace typically consists of a string of back beads adorned with a gold pendant and is compulsory to be worn by married women.

The Design of the Mangalsutra & its Significance

Typically, the mangalsutra is made out of two strings of small sized black beads as well as gold pendant. The gold pendant will also comprise of some larger bowl shaped gold beads. Though there are a number of designs and patterns that are available in the market, and vary among sub-casts, this is the basic specifications of the design of a mangalsutra. For example, in North India, the neck piece for a Manglik marriage is made with a plastic thread and in South India, you will find the piece is made won a cotton thread of yellow color specifically.

The thread is known to keep negative thoughts away and the black beads are a representative of purity.

In today’s day and age, the mangalsutra has also come to become a popular fashion statement among married women who take pride is adorning it on their necks as a sign of their love and devotion for their husbands.