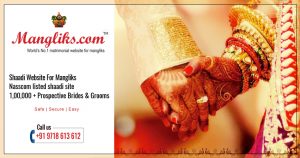 Also known as the sagai, mangni in different parts of India, this important ceremony precedes the wedding. Generally, the ring ceremony is conducted months before the wedding or Indian matrimony. However, in few cases, the engagement ceremony is held a day or two prior to the wedding for manglik or non manglik matrimony. This initial ceremony marks the start of the main event being wedding.

One Hindu tradition of ‘Vagdanam’ dates back to the Vedic era. The Ring ceremony indicates that the groom’s family is giving their word of honor to the bride’s family that they have accepted their daughter for their son being manglik or non manglik boy. It is a sort of pledge that they will be responsible for the girl’s future well-being & happiness. On this auspicious day of the engagement ceremony, the families also get an opportunity to know each other’s customs traditions and rituals.

In Hindus Engagement Ceremony is the first Step towards Marriage. The bride spends a lot of time, effort and money in order to create a beautiful and spectacular look. She prefers to wear attractive attire so that she looks attractive even more. The groom exhibits the best of his social behavior. This ceremony is very special since on this day both the families look forward to celebrate the beginning of a new life for their manglik or non manglik matrimony.

Manglik.com, one of India’s leading manglik matrimonial sites since 2006, being Nasscom listed is having huge database for numerous profiles for manglik grooms or brides. Find your soulmate and get married.

Ring ceremonies occur all over India, although they may differ in style and features. The engagement ceremony involves the exchange of a pair of rings. After the exchange the rings, the groom’s family also gifts the bride a traditional piece of jewelry such as a neck piece or bangles made of diamonds or gold. The bride’s family gifts the groom a gold chain or wristwatch. As the ceremony of exchanging of rings is completed for manglik or non manglik matrimony, it is time to seek the blessings of the elders. The youngster’sdance to the lively tunes of vibrant music and also pose for pictures. Cocktails and dinner follow.

Post this ceremony the families of the manglik or non manglik bride and the groom also get together in order to decide and announce the date of the imminent wedding. The formal announcement of the wedding date for manglik or non manglik matrimony is done amidst a lot of pomp and show. The event marks a new beginning for two families and prays for happiness and prosperity.