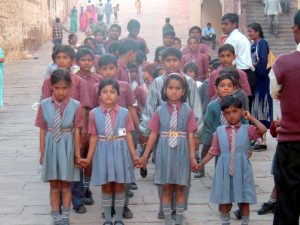 8th March 2018,on the occasion of the International Women’s Day 0ur Prime Minister Shri.Narendra Modi ji inaugurated the pan-India expansion of the “BetiBachaoBetiPadhao” scheme. PM was Addressing People in Rajasthan’s Jhunjhunu,Modi said that “a daughter is not a burden. Please look around us- see how girls are bringing pride and glory to our nation. They are among worlds best in various fields.

Indian mother-in-laws can make a lot of difference if they says that she wants a daughter in the house, then no one will be able to hassle a daughter. A social revolution has to be built and implemented, he said.

Men and women make any society go forward and prosper only if they are considered equal. Let us resolve that there will be the same number of girls taking birth as the number of boys, he further said. PM also spoke on Poshan Mission scheme, he said that when people want to condemn me, they should think about The Nutrition Mission first.

As per doctors Newborn babies should be fed mother’s milk. It has nutrition, which is good for the baby. The expectant mothers should be taken care of. They must be provided with properly nutritious food,” he said. Mission Indradhanush has brought an extremely positive change in the lives of women and children, said PM Modi as he requests people to join hands in this janandolan for the empowerment of women, daughters who are an equal part of our society.

Prime Minister will also interact with beneficiary mothers and girl children of the program, the release said, adding that the PM will also distribute certificates to the best performing districts under the scheme.

Our Pm ShriModiJi will also launch National Nutrition Mission (NNM) from Jhunjhunu along with NNM-ICDS common application software. The mission is aimed at reducing under-nutrition and low birth weight, bring down anaemia among young children, women and adolescent girls and to reduce the prevalence of stunting among children, it stated. Finally a cause for women is being honoured.

Mangliks.com is one of the well known Manglik matrimonial websites in India since 2006 with numerous profiles for Manglik brides and grooms in India. It is having 1, 00,000+ profiles for pure Manglik soulmate, being manglik girls or boys that are looking for a perfect life partner. Get married this season. Visit our website…