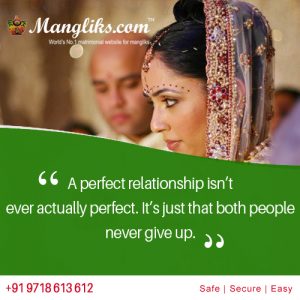 Hindu warrior class (Khatriya) is well known for their valor, reputation, bravery. Many of us are recruited in large number in the Indian army from the time o f British raj as the government recruited us in large number. They enjoy the bravery designation of being a soldier.

Rajputs have their own origin. They are not the descendants of Arya invaders, Schythians or Huns. They are mostly residing across the subcontinent, mostly in north and central parts of India. Rajput’s patronage is commendable. They would always choose out for death over dishonor. They are royal, proud, fierce less and legendary.

Rajput Matrimony is a symbol and gesture to the renowned traditional customs, rituals and traditions together with many enriching events

Mangliks.com, one of India’s leading Manglik Matrimony Sites since 2006, being Nasscom listed with lakhs of profiles for Indian Manglik or Non Manglik brides and grooms presents the enriched traditional values and rituals of the Rajput Matrimony. You may register free at Mangliks.com to find your life partner from amongst the lakhs of profiles for Indian brides or grooms whether Manglik or Non Manglik.

The rituals before marriage

This ceremony of Rajput matrimony marks the official engagement where the male members from the bride’s family the house of the groom whether Manglik or Non Manglik. The Tilak is applied on the groom’s forehead by the bride’s brother and he is presented with interesting gifts such as sweets, clothes, sword and fruits.

In this ritual of Rajput Matrimony a Havan is performed together with the installing of Ganesha idol. This ceremony is held a few days before the marriage and is done to seek the blessings of the almighty.

In this ceremony of Rajput Matrimony turmeric and sandalwood paste is applied on bride’s and groom’s bodies  whether Manglik or Non Manglik at their respective places with so much of fun and enjoyment. This function is held in an amazing way at the bride’s house and featured by women singing accompanied by Dholak. They are singing the marriage songs along with the Sehnai.

This ritual of rajput matrimony is held at the respective houses of the bride’s and groom’s where the maternal uncle donates jewellery, sweets and cloths to the entire family which symbolizes the maternal uncle is lending a helping hand for the expenses of his sister’s family

In this ceremony of Rajput matrimony the groom wear a saffron robe and is performing a Yagna with the assistance of the priest taking over the duties of the house holder. At the Yagna’s end, the groom has to act as if he is ready to become as ascetic and run away. He is then stopped by the maternal uncle as a part of the ceremony who convinces him to get married.

The groom’s family visits the house of the bride with lot of gifts, cloths and jewellery one or two day before the marriage

The Rajput baraat is an all men’s affair consisting of the men from the groom’s family. The groom is usually dressed in gold achkan and an orange turban and usually rides an elephant or a horse and carries a sword.

The Rajput barrat is all about the men. There are usually the male members from the groom’s family that are being the part of baraat. The groom is wearing the gold achkan and an orange turban as a part of the dress and rides on horse or elephant carrying a sword.

The groom is taken towards the ladies side and the traditional aarti is performed by the bride’s mother. The groom is taken to the wedding mandap accompanied by his brother or male relative or relative. Only the women are usually attending this ceremony as the men from the bride’s side are busy with the baraat and other guests. The wedding happens with the Yagna fire together with the chanting of Vedic mantras and pheras. One of the only differences is that the girl has to keep her face hidden through the marriage under a long veil 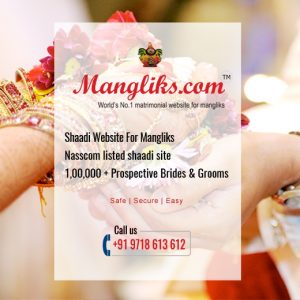 After the marriage rituals

Grihapravesh Ceremony
In this ritual of Rajput matrimony the bride enters her husband’s house following some traditional rituals.

This ceremony of Rajput matrimony happens the day after the Grihapravesh where the bride being in veil is introduced to all the family members of the groom. They in turn give interesting gifts and bless the bride.

Bidai or farewell ceremony in Rajput matrimony is marked by the bride leaving the parent’s house. The coconut is kept under the car’s wheel. According to the ritual, the car has to break the coconut while moving before proceeding ahead. The bride rides in the car and before that she has to open her veil and she is gifted a piece of jewelry by the husband for revealing her face.

Mangliks.com is one of the well established Manglik matrimony sites and  the dream  for the lakhs of Indian people who are looking for the perfect life partner and  seeking India Manglik or Non Manglik brides or grooms for the marriage relation.