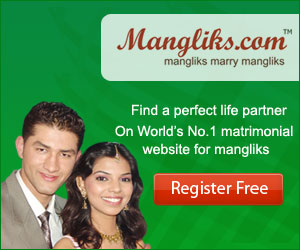 A kundli is basically an astrological chart that follows the norms of Indian Vedic Astrology. It is used t plot the placement of the 9 planets of the solar system in different houses depending on the date and time of one’s birth. It is a common belief that these placements play a significant role in the traits and characteristics that a person possesses.

Kundli’s matching thus makes an integral part of deciding whether or not a couple must marry, because it is representative of a couple’s level of compatibility. Typically, in an Indian arranged marriage setting, the kundli’s are matched to check whether or not this particular marriage will be a good fit or not.

In addition to identifying factors such as education, wealth, and off-springs, matching the kundli also helps in finding out some negative traits as well. The mangal dosha is one of the most dreaded astrological traits, especially when it comes to marriage. It is believed, that that a person with a mangal dosha marries someone who is not under the same effect; it can have a negative impact on the marriage. In some extreme situations, it is believed to even lead to the death of a spouse.

The matching of the kundli’s in this case becomes extremely important to make sure that a couple undergoing Manglik matrimony is not affected by any negativity. Kundli matching is sometimes a matter of personal interpretation. While most astrologers will be able to give you accurate predictions, sometimes it so happens that different astrologers may offer slight differences. Hence, it is extremely important that you approach an astrologer who both families have complete faith in and is fully qualified to conduct the required analysis.